The prime suspect in the Shella Condes rape case, tricycle driver Ricardo Eyawan(Iyawan), admitted that he was intoxicated prior to committing the crime last Sunday evening.

While in custody, Eyawan(Iyawan) sought forgiveness from the Condes family but stood by his statement that he was only after the mobile phone of the victim. He added, however, that the victim fought back which prompted him to retaliate. He said that he brought the victim to a nearby sugarcane field in order to discreetly secure the mobile phone and the cash. The victim was resisting though at which he responded by punching Condes and hitting her over the head with a stone.

The next day, the victim’s mother, Salvacion Condes, reported that her daughter was missing. Police searched for the suspect in the vicinity but discovered that he went home to Himamaylan City. Officers in Himamaylan arrested Eyawan(Iyawan) and after the interrogation, he led them to the body.

Shella Condes was a resident of Fortune Towne, Brgy. Estefania, Bacolod City. She was a college student at STI-WNU campus taking up Information Technology and was supposed to be an incoming senior had this tragedy not occurred. Her body was found in a sugarcane plantation naked with her hands tied using her clothes.

Ricardo Eyawan(Iyawan), who is currently detained at Police Station 4, is facing charges of rape and robbery with homicide.

This Saturday morning, Mayor Monico Puentevella also visited the Police Station where the suspect was being held. Upon facing the suspect, the mayor had nothing but harsh words. He mentioned that if the country did practice the death penalty, he’d see the suspect electrocuted. He also assured everyone that the suspect would serve the rest of his life in prison. 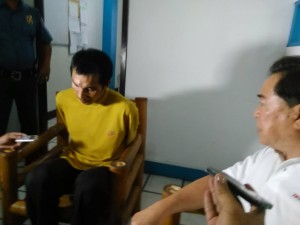 Additionally, an emotional Salvacion Condes, the victim’s mother, was also there to talk with the Mayor. She relayed her anger at the violent crime committed and also expressed sadness given that her daughter would’ve celebrated her 20th birthday this coming May 23 and was also in her last year of college at STI – West Negros.