↓ Skip to Main Content
Home › International › Fight of the Century: Lawsuits Piling in

Fight of the Century: Lawsuits Piling in

Fight of the Century

Lots of frustrated boxing fans across the US are calling the Floyd Mayweather Jr. and Manny Pacquiao fight, dubbed the Fight of the Century, a fraud. Not only that, they’ve brought along their lawyers to help them get their money back. At the moment, there are at least 32 class action lawsuits which claim that Pacquiao should’ve revealed his shoulder injury prior to the fight. This is because they are unhappy with the overall pacing of the fight which seemed really lackluster. Some even went so far as to call it the “fraud of the century.” 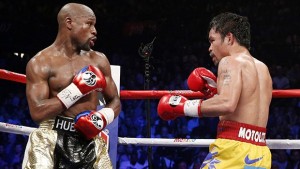 One lawsuit in Texas, alleging that the fighters were racketeering, stated that the fight was neither great nor entertaining. It further added that the fight was slow, boring and lackluster. Then there’s this other lawsuit by Flights Beer Bar in California. According to them, Pacquiao and his team were in it just for a cash grab. The bar had to shell out $2600 in order to show the fight live.

Whether or not it was a cash grab, it remains a fact that the fighters are going to back no less than $100 million with Mayweather getting more than Pacquiao. Showtime and HBO also broke records by bringing in $400m from pay-per-view sales. With 4.4 million subscribers paying, that would amount to about $100 each viewer. The lawsuits are all claiming to return such amount to the viewers.

There are many trivial things about these cases though. It isn’t as easy as returning items to your local mall. The first issue is whether the judges will consolidate the various cases into one. After that, they will need to decide if it’ll be certified as a class action suit. All the lawsuits are seeking to have a jury trial and a minimum of $5 million in repayment for damages. Basing on the Class Action Fairness Act of 2005, the amount in controversy should be greater than 5 million and that is exactly what was filed.

While there are lots of theories surrounding why Pacquiao withheld the information, some experts believe that it was simply to keep the fight on. Maureen Weston, Pepperdine University’s Entertainment Director, believes that they would have had more lawsuits if the fight was cancelled.