Only 2 more signatures are needed by Sen. Koko Pimentel on his draft report to obtain a majority vote that will recommend a formal plunder charge filing against VP Jejomar Binay and his cohorts. This is in relation to the overpricing of Makati City Hall Building II which they are allegedly directly involved in. Senator Pimentel needs 9 signatures before it becomes an official blue ribbon committee report. He said that there are already 4 signees and that there were 3 others set to sign. 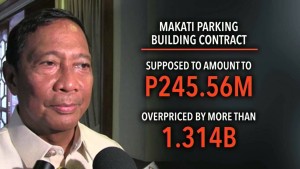 Sen. Pimentel heads the subcommittee which is tasked to look into the corruption allegations filed against VP Binay and that includes the Makati building. Pimentel is confident that he will get all 9 signatures needed. He adds that he hasn’t talked to the others yet but will do so soon. Belonging to the 4 signatures he has garnered are those of Grace Poe, Antonio Trillanes IV, Peter Cayetano and himself.

One person who has expressed interest in signing the draft report is Sen. Serge Osmeña. In his interview with dzBB radio, he said that it was a convincing presentation. He added that the Vice President is always welcome to attend the hearings so that his side could be aired as well. It would also help to have him present so that he could verify the statements he sent in his affidavit to the committee.

As soon as Sen. Pimentel gets the 9 signatures, which will signify majority of the committee, he says that he will send it to the Senate secretariat for it to be regarded as a committee report. Moving forward, it will then be subject to interpellation and sponsorship. Pimentel also said that there is little time left for the VP, stating that the blue ribbon committee have 3-5 hearings left before they end their inquiry.

Pimentel confirmed over on dzBB radio that the charges were being made against Vice President Jejomar Binay, Makati Mayor Jejomar Binay Jr and their associates who where then in the bids and awards committee.