Spratlys: China Not Backing Down 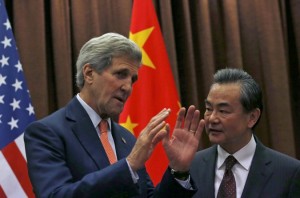 This Saturday, talks between US Secretary of State John Kerry and China’s Foreign Minister Wang Yi seemed to be hitting a dead end. According to China’s top diplomat, Beijing is in no way backing down from their claims in the South China Sea which is raising tensions with neighboring countries.

In the news conference, Wang Yi further reiterated that China’s claim over several uninhabited reefs in the vicinity of the Philippines was “unshakable”. He says that the determination of the country to pursue it is extremely firm. This was also an implied message that Mr. John Kerry’s continued efforts to ease Chinese tension with their Asian neighbors is falling on deaf ears.

Mr. Kerry is in China primarily to discuss probable plans for a White House Summit between both country’s leaders. This Saturday morning, Mr. Kerry and Mr. Wang talked about a wide range of topics that have mostly been viewed in similar lights by both sides. Such topics include Iran’s nuclear program, strengthened military relations between the US and China and also climate change. The topic that hasn’t been boding well between the two countries though is the dispute in the South China Sea. After Chinese President Xi Jinping rose to power last 2012, China’s dredging efforts have definitely seen a noticeable rise. While the US doesn’t have a vested interest in the territorial disputes between China and five other countries, it’s primary concern is the freedom of navigation of the area which is considered as a high traffic shipping lane.

The most controversial area, known as the Spratlys, is a significant 1000 miles from Hainan Island, which is the southernmost point of China. This area, however, is simply off the coast of the Philippines, which is an American treaty ally.

Satellite imagery based on recent captures show that China is building a concrete runway on one of the islands that is said to be utilized for military purposes.

Spokespersons of the US State Department said that Mr. Kerry is set to send a strong message to the Chinese leaders but the results of this Saturday’s conference seemed otherwise. This might be, in part, attributed to how Chinese officials have setup the conference. They only allowed two questions, 1 for each leader. For Mr. Kerry, only a Western media outlet was allowed to ask while for Mr. Wang, one from the Chinese media. There was a brief interlude in the script though when Mr. Wang answered a question which Mr. Kerry declined to answer. In his statement, Mr. Wang said that American military presence in the region would have little to no effect on China’s resolve.