Ricardo Ewayan, the suspect in the recent Shella Condes rape-slay case, was recently hurt by a stab wound on his neck. He was brought to Corazon Locsin Montelibano Memorial Regional Hospital late Monday afternoon. Ewayan, who also goes by the alias Badong, is a 33 year old(34 in other reports) tricycle driver in Brgy. Estefania, Bacolod City. He was nabbed by police last May 15 for the alleged rape and murder of Shella Condes. He was in the Metro Bacolod District Jail Special Intensive Care Area when the stabbing incident occurred and is now in critical condition at CLMMRH. 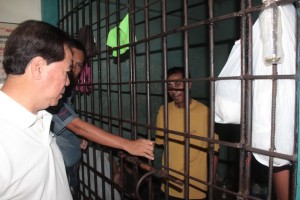 According to Larry Fuentes, District Jail Chief Inspector, the suspect is Dondie Abellar, a violator of the Comprehensive Dangerous Drugs Act of 2002 (RA 9165). The item used to perform the deed was identified as an improvised pointed spoon(sharpened spoon handle). Ewayan had only been in the District Jail for about an hour when the incident happened. According to authorities, both he and Abellar were sharing the same cell as they were both newcomers.

Mr. Fuentes has already instigated an investigation of this incident as a report will need to be sent to the regional BJMP (Bureau of Jail Management and Penology) office in Iloilo. He additionally admitted that they have limited space which prompted them to combine inmates. He clarified though that this is the first time a stabbing incident has occurred inside the complex.

Ewayan was initially set to be released from police custody when the reglamentary period had elapsed. He, however, chose to remain in Police Station 4 as he feared for his safety. Last May 27, the Bacolod City Prosecutor’s Office filed a case with the Bacolod Regional Trial Court against Ewayan citing robbery with homicide. On May 29, a warrant of arrest with no bail was issued by Judge Pepito Gellada, Bacolod RTC Branch 53. With this order, Ewayan was transferred from Police Station 4 to the Bureau of Jail Management and Penology jail on the same day.