Last Wednesday night, Councilor Carl Lopez reported an incident to Police Station 2 in Brgy. Mandalagan. He reported that Rayfrando Diaz II, Bacolod City Legal Officer, provoked him to a fist fight while we was at the ground floor of L’Fisher hotel. In the blotter, Lopez said that he was there in a meeting with 2 of his staff, namely Maribel Vinluan and Chabellie Subaldo Descutido. Also present with them was lawyer Joselito Bayatan. 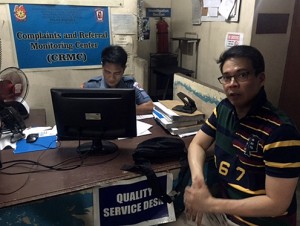 In his statement, he recounts that when he saw Diaz, he waved to him at which point he approached the table and challenged Lopez to a fist fight. Lopez added that he simply replied, “Buas lang(tomorrow),” but Diaz insisted and said, “subong lang(now).” At this point, the councilor was already feeling embarrassed but still profusely rejected the challenge of Diaz and kept telling him to save it for tomorrow. Mr. Bayatan, according to the blotter, in an effort to keep things civil, also advised the councilor to ignore Diaz.

Lopez described the legal officer as a raging bull who was adamant to get into a fist fight with him. He also mentioned that Diaz was asking why he is being attacked personally by the councilor. For those who are not aware, Lopez filed a case with the Ombudsman against both Mayor Puentevella and CLO Diaz. The issue raised by Lopez to the Ombudsman was regarding the suspension of former OBO head Isidro Sun which both helped in delaying. He called it a connivance by the two city officials.

For his part, Diaz also recounted a different version of the story. He said that he saw Bayatan, who was a former CLO lawyer, wave to him and so he came over. He said that he didn’t even see Councilor Carl Lopez at first. He further added that the conversation they had was simply casual and not at all scandalous. He noted though that he did refuse to shake hands with Lopez due to that case with the Ombudsman. He said that the handshake offer didn’t seem sincere at all. Lastly, he also said that it was the other way around in which Lopez provoked him to a fist fight which he countered by saying tomorrow.

Former CLO head Bayatan, who pacified the two parties, said that it was Lopez who was telling the truth and that Diaz issued disturbing and provocative words. Councilor Carl Lopez is also following up on copies of CCTV records from L’Fisher to support his claims.