A 16-year old student from Silay Institute was found dead near a creek in Brgy. Bubog, Talisay City yesterday morning. She was said to be on the way to school but was found over 1 kilometer away from their house. Authorities are also considering the possibility of rape.

The victim is Marissa Parreño, a 1st year college student taking up BS Business Administration at SI, Silay Institute.  According to the victim’s father, Federico Parreño, his daughter left at around 9 AM and headed to school. She was found at around 9:30 AM by Rodolfo Dizon, a local fisherman, who was near the body of water.

Dizon stated that he was shocked when he saw the victim’s hand in the water. He right away contacted the Brgy. Tanod who then coordinated with rescuers to recover the body. According to Jed Tribaco, Brgy. Kagawad, they recovered the body with an intact Silay Institute uniform except that the blouse was opened, the skirt was lifted and the victim had no underwear. 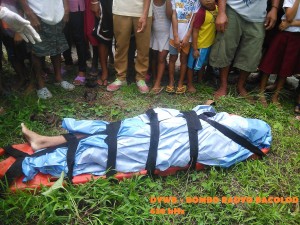 Police are still investigating whether the victim was indeed raped and are searching for who was responsible for the deed.