In the article posted by ABS-CBN, Bank of the Philippine Islands, on Friday, has called for tighter punishment against those who are apprehended for ATM skimming. According to Ramon Jocson, BPI Executive Vice President, Philippine banks are being victimized by Eastern European gangs that are specifically using technology targeted to ATMs. He mentioned that, while these foreign suspects have been caught,  they are able to post bail as there are provisions for it in the law.

Jocson, in an interview on ANCs Market Edge, stated that banks share information on this type of illicit activity and they believe the gang is mostly comprised of Romanians and Bulgarians. He also reiterated that the bail is a measly ₱15,000 – ₱20,000, which is incomparable to the potential ₱4 million they can obtain from ATMs. Jocson is appealing to the House of Representatives (Congress) to revise the penalties for violations such as this. He also quoted that in other countries, like the US and Singapore, such acts are considered economic sabotage and was hoping for a similar stance in the country.

Just last Wednesday, rival bank BDO Unibank also confirmed in a senate inquiry that 7 of their ATMs have succumbed to skimming. At the Senate committee on Banks, Financial Institutions and Currencies, BDO Executive Vice President Edwin Reyes stated that three infractions in different undisclosed locations have compromised 7 ATMs. These 7 ATMs account for 0.02% of the bank’s overall 3,700 ATMs across the Philippines.

Reyes also mentioned that new methods of skimming are on the rise which are more difficult to detect and can potentially fool current anti-skimming systems. He added that BDO is upgrading its ATMs to remedy the problem.

BDO has also called on its clients to report any cases of ATM skimming. This is so that compromised cards that have been reported can be disabled right away.

ATM skimming is a process used by unlawful individuals to capture the magnetic stripe data found at the back of your ATM card. Skimming devices are usually used in conjunction with PIN capturing devices to pull of the theft. Once you fall victim to both these devices, the people responsible can easily load your electronic data into a fraudulent card and use your captured PIN to withdraw your money.

Both ATM skimming and PIN capturing are problems faced by banks worldwide.

How to Avoid Being a Victim 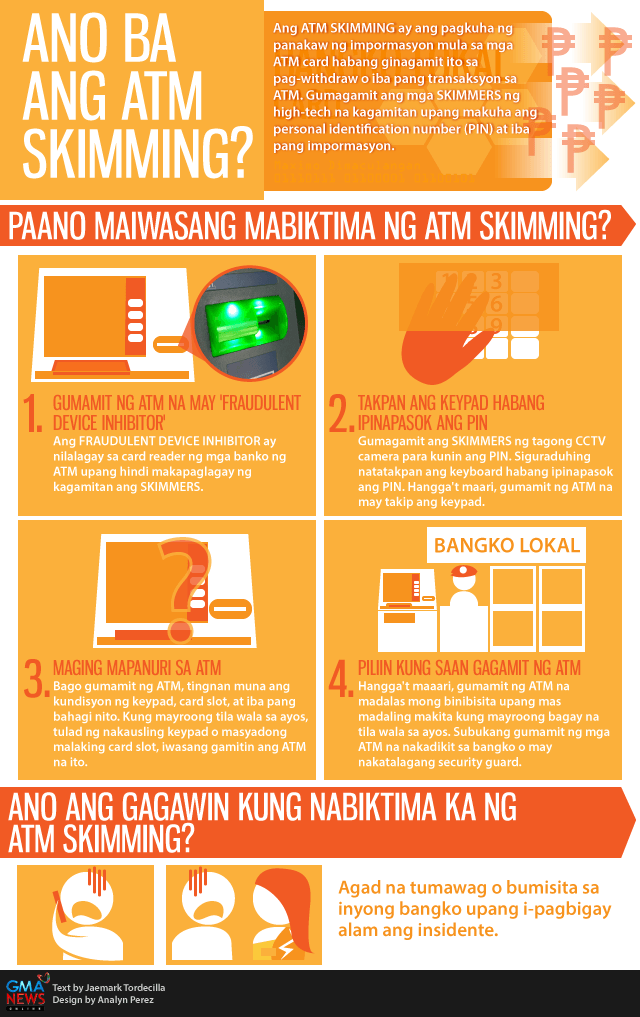